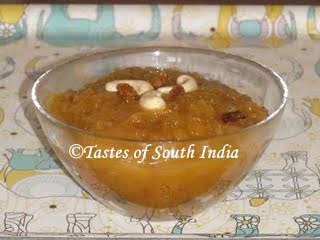 This is one of the signature dishes of the people belonging to Shivahalli (Udupi) in Karnataka state. As Hindu God Vishnu devotees, traditionally, for each and every auspicious occasion its considered mandatory to prepare Hayagreeva Muddy for Nivedya (Offering to God). Its a fairly simple sweet dish made out of Channa dal (Chick peas) lentil. The sweetening agent is traditionally Jaggery however, my Amma (Mother) would prepare it by adding sugar which tastes awesome too.
Off goes this recipe for MyLegumeLoveAffair-14 hosted by Susan of The Well-Seasoned Cook.

The main taste to this dish, rather the aroma to it comes from the Coconut we add which has to be roasted till nice golden brown.Here are the ingredients... 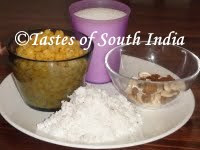 Method:
Soak Channa dal for about half an hour and pressure cook it until just its 3/4th done with 2 cups of water . Transfer the dal along with its water (used while pressure cooking) to a kadai (or any heavy bottom vessel) and turn on the heat. Let it boil for 10 minutes. Now add the sugar and let it simmer for atleast 20 minutes. The mixture will attain a thick consistency. In a separate pan, add Ghee and when it is hot, add the Cashew nuts. Roast them till golden brown. Now add the Raisins and the Grated Coconut. Roast Coconut till golden brown. Add this to the boiling Channa dal mixture and mix well. Add Cardamom powder and remove from heat. Serve hot.

Email ThisBlogThis!Share to TwitterShare to FacebookShare to Pinterest
Labels: Sweets